"A committed, dynamic and innovative leader"

"For me, Colin Barrow’s outstanding contribution to Westminster is his determination to drive up educational attainment for our pupils"

As in his business career, Colin’s political work might best be characterised as pioneering – a quality which has been recognised by David Cameron, Boris Johnson and Eric Pickles, and many of those who have worked alongside him.

The former would result in Colin’s leadership of the highest profile council in the UK: Westminster. The latter, over the course of 13 years, helped shape the foundations on which David Cameron’s modern party of government is built.

A social progressive and fiscal conservative, by his own account Colin has ‘always been interested in politics. I came out of business, I sold it and sat down and said ‘what am I going to do now?’ and found myself surrounded by men in blazers who said: ‘Have you ever thought about going into local government? I was propelled into a seat, and the next thing I knew I was deputy leader of the Conservative group on Suffolk county council.’

There has always been a seriousness of purpose and foresight driving Colin’s political work from its earliest days. 1997’s General Election loss exposed the toll that 18 years in government had taken upon the Tories, both as a party and in the eye of the electorate. With its MPs in the Commons decimated and the first in a string of new leaders on the opposition benches, the Conservative Party required new thinking and new blood.

He co founded Policy Exchange with Francis Maude to generate such new thinking. And it worked – recently described by The Guardian as a small-government thinktank influential with Cameronite Tories. 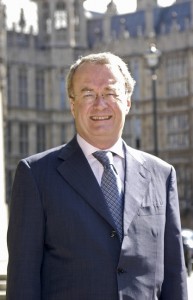 ‘Colin has led Westminster to record levels of public satisfaction and has broken new ground in public policy. His City Recovery programme created 3,000 new job and training opportunities after the recession hit London in 2009. His Family Recovery policies pioneered the government’s approach to helping problem families and the Tri Borough programme is leading the way to shared services’

Eric Pickles
Secretary of State
for Communities and Local Government

‘For me, Colin Barrow’s outstanding contribution to Westminster is his determination to drive up educational attainment for our pupils.’

‘A committed, dynamic and innovative Leader’