Colin is best known for being a pioneer in whatever he does, sometimes ahead of his time.

His business career is synonymous with the rise and development of the hedge fund industry – an industry which has seen remarkable global growth during the time in which Colin has been one of its leading exponents – and still is.

In his first role, on graduating from Cambridge University, Colin specialised in services to the emerging off shore oil industry – as commercial manger at John Brown Group.

But it was at ED&F Man – latterly the Man Group – where Colin’s tenure saw him take a previously niche area of financial services and transform it into a globally successful company. He was, without doubt, ahead of his time. Today hedge funds are an established $2 trillion global industry with influence, purpose and ambition and Man is amongst the leaders in the industry.

… right in the middle of Gordon Gekko, greed is good, red braces. It was a fascinating, fascinating time …

Starting in 1983, Colin set up Man Group’s international fund management business from bases in New York, London and Switzerland. He found himself at the epicentre of the ‘80s Wall Street boom, in his own words “right in the middle of Gordon Gekko, greed is good, red braces. It was a fascinating, fascinating time. People really worked hard and wanted to get on and there was a sort of immigrant mentality.” As Managing  Director of  this  new  division, Colin was arguably the main architect of Man Group eventually becoming the largest quoted hedge fund in the world.

His success at Man Group generated financial rewards for shareholders and corporate management across the board. After a decade and a half at the helm of this major player in a high-pressure industry, Colin left Man Group in 1996, two years after its public flotation. 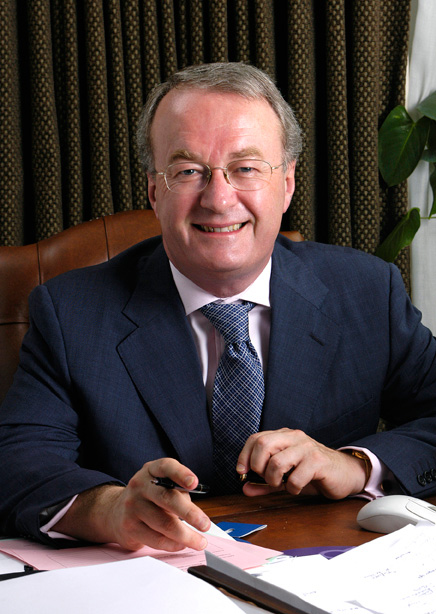 Although able to retire, Colin has never stopped working, whether in business, charitable or public service.

Colin moved onto become chairman of Sabre Fund Management. An old name in the business, Sabre in this period represents a partial success story, whose fluctuating performance – hit by the post 9/11 downturn of the early 2000s – serves as a reminder of quite how hard earned any sustained growth in this industry is.

Colin founded and was executive chairman of Alpha Strategic from 2005-2014, an innovative public investment management company dedicated to buying minority revenue streams from independent Investment Managers with the twin objectives of providing substantial value to both the Investment Managers and its Shareholders.

Alpha’s unique business model and its seasoned and expert management team are two of the central factors contributing to its great potential.

Colin’s was integral to shaping the development of this innovative financial business. Alpha was acquired by Northill, its majority shareholder, in 2014 and when it had been taken private, Colin stepped down from the board.